There are more cloudy days in a year around here than sunny, making photography interesting if you’re into bright colors and blue skies.  So you take what you get.  And in winter that means shapes, forms, composition and tones.

Dark and light make up the winter world.  Nature provides the edges, defining one part of the world from another.  And the edges change.  You can go back to the same place every day and find something new.

Water’s relationship to winter is always fascinating.  Moving it creates surfaces and borders that wax and wane as solid fights liquid for supremacy, always with temperature as an ally for one or the other.  The flowing stream supplies a source of freezing material at the shore, gradually building up a new edge that is then eroded away by the moving water.  Today a solid sheet stretching from the ground over the creek, tomorrow a sinuous knife edge being sharpened each moment by its liquid parent. 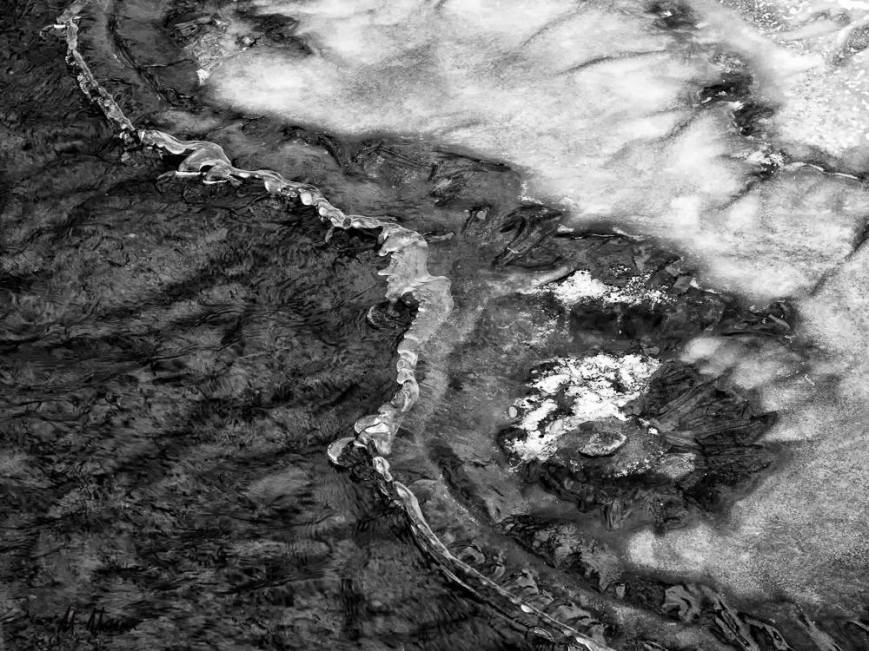 The frozen lake, until recently a source of nourishment for the trees on the edge, now a surface holding back its liquid from the bare branches.  The white frame of the sky and ice surrounding the tendrils of limbs waiting for the thaw.

The ice caves in Lake Superior are pretty famous and a great thing to see.  But up and down the shore of Lake Michigan, mostly on the Wisconsin side, are bluffs and rock formations that are battered by the wind and waves, in cold weather becoming enveloped in ice formations just as interesting as those found in Superior.  Before Lake Michigan freezes near the shore, when the ground temperature stays below freezing, the wind will push the waves against the rocks, kicking up spray and waves that envelop the shore and stay as ice formations.  The scene changes daily depending on wind, which controls the size of the surf, and the temperature.

One area easily accessible is Cave Point County Park, south of Jacksonport in Door County.  The limestone of the Niagara Escarpment is exposed as rocky bluffs on the lakeshore and the southeast winter wind drives the almost-freezing lake water against the shelves and coves.  The ongoing erosion has cut out overhangs while leaving layer-cake formations along the edge.  Each layer seems to direct the water into a chain of icicles.

Even the trees huddled around the rock edge aren’t safe as waves and spray drench them repeatedly, building up an impressive array of ice formations that dangle over the bluff.

It’s pretty impressive to stand there is high surf and literally feel the formation shudder as the big waves hit it.  Reminds you how impermanent even the ground below us is in the context of geologic time. 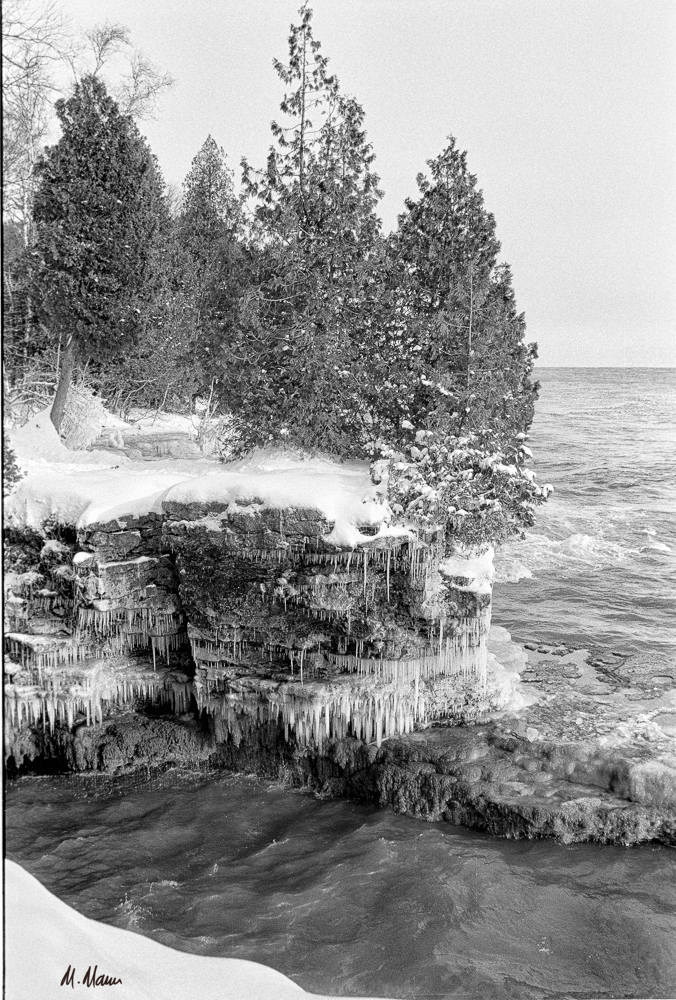 Huddled on the ground peering from between strong shoulders, watching the setting sun, mantled with a white cloak.

I use a lot of digital equipment but when I’m interested in really controlling the look of the image I get under the hood behind my view camera.  Being able to “disconnect” the plane of the lens from the plane of the film provides opportunities for images that are practically impossible with a regular camera.  Our brain does such a great job of interpreting what we see into the “correct” viewpoint that we’re generally surprised at pictures coming out of a regular camera.  Oddly, it takes a view camera with all its adjustment capability to deliver a photograph that looks “normal.”  The following three images are examples of what I’m talking about.

Snap this shot with a regular camera and you’ll get something that might look similar.  Depending on where you stand the corners of the building might be vertical or slightly slanted, the near part of the curved wall at the bottom might be in focus or not, along with the trees in the distance.  It depends on the lens being used, the tripod setup and aperture selected.  For a view camera, making sure all these elements are exactly as desired is simple.  A little front tilt of the lens to “see” the foreground and an aperture stopped down to increase depth of field.

This one would be harder for a regular camera.  The sign is about 5 feet from my camera where as the tower is about 50 feet away.  My camera is set up slightly down-hill from the tower and sign.  And the sign and tower are at different perspectives.  To make sure everything is in focus, and that the vertical parts are really vertical while the horizontal parts stay that way required using most of the view camera’s movements.  The lens and film plane are swiveled enough to get the focus for the tower and sign in the same plane, the lens has been lifted higher than the film to keep the perspectives the same while being tilted forward slightly to “see” the path in front of the sign, and the aperture is stopped down to f/64 so that everything is in focus.

This was the simplest shot to make.  Level the camera, tilt the body down slightly to “see” the ice triangle in the river, tilt the film plane to vertical to keep the trees straight, and tilt the lens forward enough to put the foreground and distance in the same focus.

Setup and adjustments like this usually take 15-20 minutes per shot – definitely not a candid image.  Staring at the image developing on the glass screen under the hood is worth it, though, as you see how the adjustments render the shot just as you want it and just as your eye sees it.

One of the definitive books on this subject is Ansel Adams’ The Camera, which provides instruction on using the adjustments to get the image you want.  There are other sources out there but Adams writes well and serves up sound advice from years of experience crafting images exactly the way he wanted them.  It’s fun to read, and who knows, might encourage more people to try out a view camera for a different perspective on photography.

Just kidding – right now there are few colors other than the Christmas decorations remaining on the houses and streetlights.  Enough snow has melted to drop the landscape from monochrome to at least light and dark tones.  Weather is three cloudy days for every sunny one as some storm near Alaska keeps churning fronts across the Great Lakes.  I take whatever lighting I can get to practice exposure and composition.

A local park was created from an old limestone quarry and crushing site.  A few walls remain to outline the work structures that once stood on the side of the giant hole in the ground.  The easiest building material was the slabs of limestone being brought out so there are lots of lines and shapes to see, set against the organic background of trees.  A good place to play with shadows, shapes, tones and focus.

The following is a mix of digital and film – can you tell the difference? 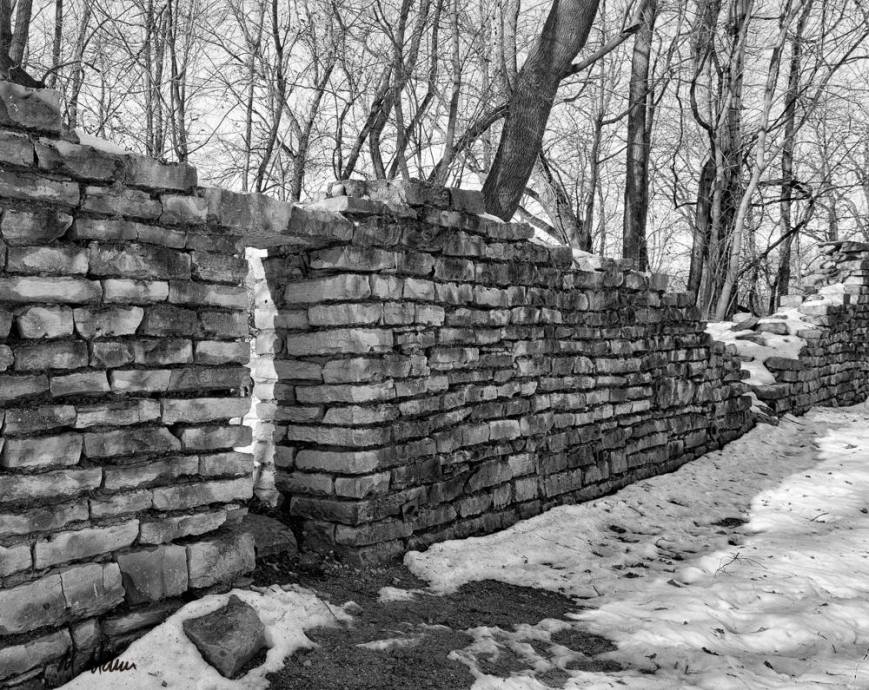 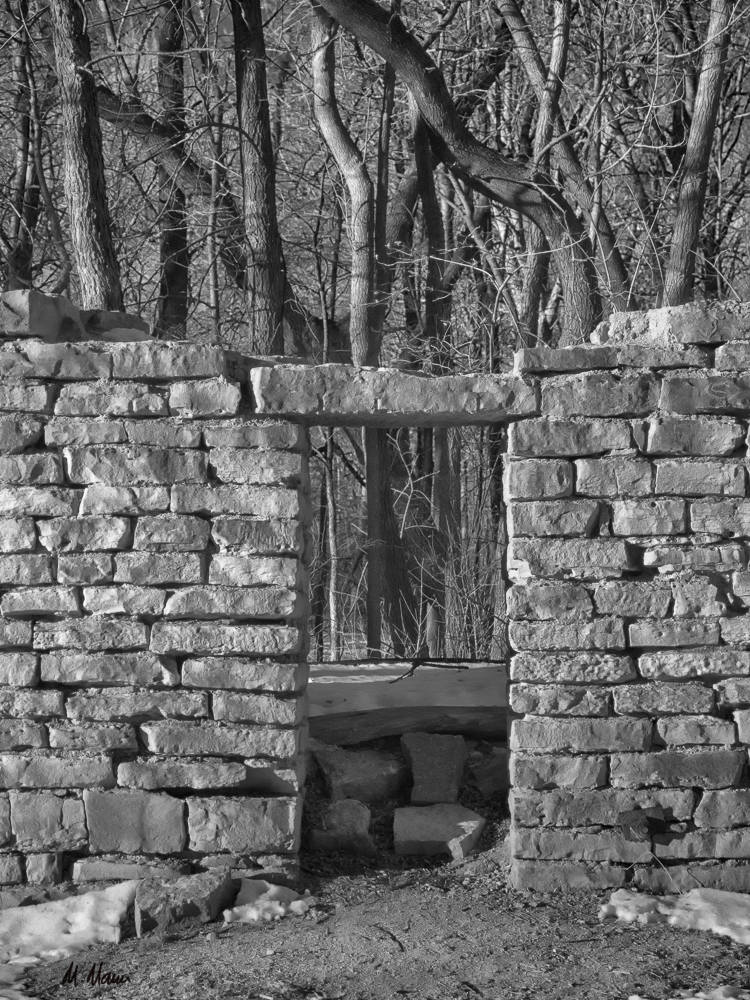 The first image is 4×5 sheet film, Kodak TMax 100, exposed and developed for neutral results.  The other two are digital infrared images, long exposures through a R72 filter and then processed through NIK Silver Efex Pro software.  Each has a unique look to it that appears independent of the source.  If I stare at them long enough I think I see a better gradation across the tones in the film image than the digital but that’s probably artificial due to the differences in processing methods.  The film scan contains much more information than the digital, though, so it will produce a much larger print at the same resolution as the digital.  But who prints anymore?

What happens to the seeds failing to reach the ground?  How frustrating that must be to the tree after all that work in spring, summer and fall.  Will the sinking level of the snow gradually lower the seeds to earth where they can complete their mission?